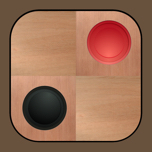 Popular Malaysian traditional board game, Dam Haji is now on your iPhone/iPad !

Dam Haji is a two-player traditional board game and one of the Checkers/Draughts variations.

The promoted piece is known as "Haji" in this game (hence the name of the game).

The objective is similar to the standard Checkers/Draughts i.e., to capture all opponent's pieces or to force the opponent to have no more legal moves.

- 2 ways to make a move, by clicking at game piece or dragging it.

- Play against computer with 3 difficulty modes

- Invite friend or play against anyone online using Game Center

- Statitistics to keep your matches history